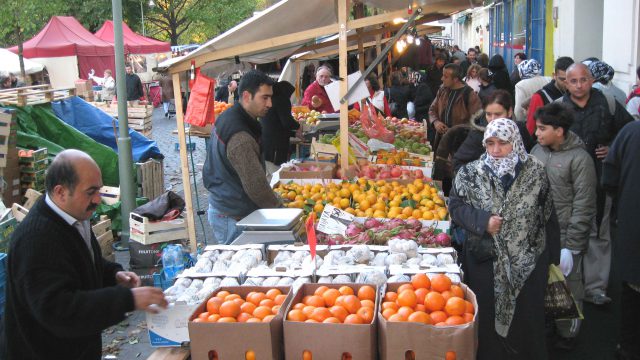 A street market is not only a public space where people gather to sell and buy fruits, vegetables, fish and other goods, but is also a social meeting point where time and space acquire a different dimension. Each street market has its own “personality” defined by a particular soundworld and a characteristic mix of voices. Each stallholder has a personal way of speaking, shouting and singing to catch visitor´s attention. Stallholders´ voices fluctuate sometimes gradually, sometimes suddenly, between speaking and singing voice.
The work title refers to the music style and technique that inspired both the concept of this piece and the main approach used for the treatment of the sound materials. Generally speaking the idea of Remix in popular culture stems from the model of music remixes produced around the late 1960s and early 1970s in New York City and Jamaica. As a cultural practice a Remix is a second mix of something that already exists. It could basically be defined as the activity of using recordings or samples from pre-existing materials to combine them into new forms.
The composition process focused mainly on the deconstruction and re-arrangement of the many vocal utterances produced by different stallholders. This kaleidoscopic conglomeration of voices gave birth to a fictional street market that is beyond the reality found in the original recordings
The piece includes recordings made in street markets in Berlin, Sao Paulo, Catania (Sicily), Pekin and Tel-Aviv. The dramaturgy of the piece is built upon an interplay between vocal textures, rhythmic structures and musical passages.
My special thanks to Stefan Fricke, Hanna Hartmann, Andreas Bick and Douglas Henderson for their support and contribution.