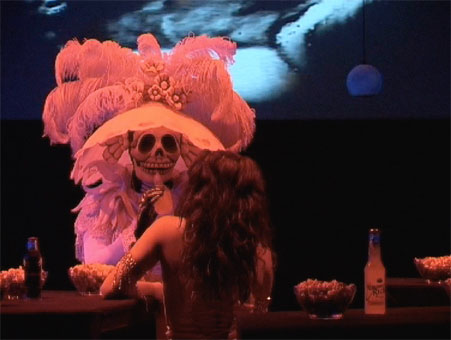 Twelve ball loudspeakers painted with UV-paint were hung at different hights above groups of sofas.
Sofas were distributed around a bar placed roughly at the center of the space.
The whole space was illuminated with UV spotlights.
A big screen was placed on two walls of the space for video projections of collaged porno films of the silent era.
Visitors were provided with drinks and popcorn.
Twelve different soundtracks were created using short dialogues extracted from diverse films from the 40´s and 50´s in twelve different languagues.
Each soundtrack was assigned to a ball loudspeaker.
Under each loudspeaker visitors could hear a different sound mix.

” In an imagined future time, life consists of hedonistic and carefree days where people are in search of pleasure and the next kick. Cultural and intellectual activities are rare, politics and social issues fail to interest most people. The entertainment industry determines the course of life for a primarily urban population. Formats penetrate ever deeper into the minds of consumers, and messages are delivered with ever higher resolution to the last hidden corners. Now, the most recent trend turns to a completely different subject: the newest hype is the psc, the paranormal signal catcher: the voices of the dead as music. With the PSC, voices from the ether can be tracked down and transformed into acoustic signals. Also signals from natural objects can be made audible – out of the unknown dimensions of trees, stones, or rivers, beyond all known frequencies. The PSC was brought onto the market primarily in cities, in the form of “radio rooms”, a mixture of nightclub and cabaret, with independent listening areas. Consumers celebrate PSC as the new radio.”