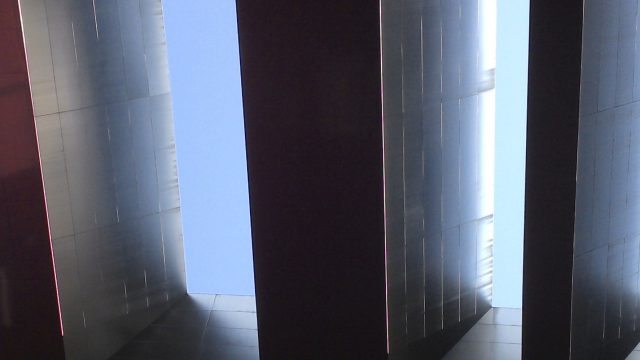 In this piece my idea was to create an essentially abstract soundscape in which the instruments are integrated into the pre-recorded part to create a single soundworld. Therefore, the cello and the trombone do not carry any soloistic role. The piece is divided into three sections which depict different aspects or perspectives of an imaginary abstract soundscape. The whole structure of the piece is mainly based on moments of tension and relaxation with particular emphasis on rhythmic textures.
The pre-recorded part is made out of some orchestral percussive sounds recorded at the University of Birmingham. These sounds were later edited, manipulated and assembled on the computer in order to expand the sonic palette. The orchestral percussive instruments recorded were: timpani, glockenspiel, metal wind chimes, triangles, bells, cymbals, woodblocks, claves, woodsticks, snare drum, tom-toms, cowbell and spring coil.
In the instrumental part I aimed to explore a range of gestures, timbres and textures that could be integrated into the sonic fabric of the pre-recorded part.
The three sections correspond to three different abstract soundescapes made out of different musical textures. However, a sense of unity is achieved particularly through timbre and rhythm relationships. Thus, the three soundscapes taken together create a single soundworld.
The players were Philip Harrison, trombone and Richard Jenkinson, cello. The conductor was Jonty Harrison.