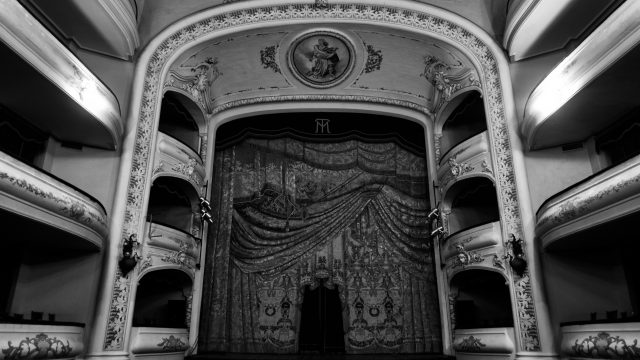 ” … an empty theater produces me a spooky feeling. It is as if all the objects and machinery suddenly become alive … and the voices of all the actors and opera singers that once performed in the theater start whispering from the boxes and stalls … do you think that a dramatic character or the voice of an opera singer continue to exist in a theater, after a performance? … maybe it haunts the theater… ” (freely adapted from the play Six characters in search of an author by Luigi Pirandello, 1924)

This piece is about the sounds and the “memories”of the Teatro Municipal Rafael de Aguiar in San Nicolás, Argentina (founded in 1908).
This theater still keeps some scenographic machinery and devices that have not been replaced since the old times. The recorded material includes sounds produced by objects and machinery such as the rope that rises and puts down the front curtain, soma stalls seats, a spiral metal staircase, old parts of the wooden stage, the mechanics that put up and down the scenery, creaking doors and old machines for producing light and wind.
I also recorded actors reciting fragments of some theater plays that were performed in the theater. The actors were asked to stand at different places in the theater (stage, stalls, boxes). In addition, I used fragments of a 1963 magnetic tape containing voice recordings of actors performing a theater play. Finally I wrote a semi-notated-graphic score for the tuba player Robin Hayward, who had to improvise on sound materials according to basic parameters given on the score.