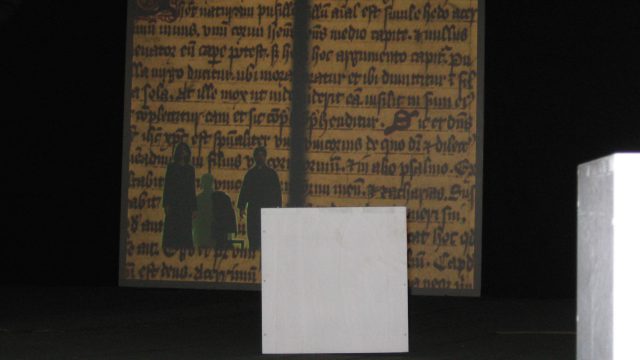 In his Libro de los seres imaginarios (“Book of the imaginary beings”) the Argentinean writer Jorge Luis Borges explored ancient Bestiariums to compile a handbook of fantasy creatures conceived through time and space by the human imagination. Some examples are the Unicorn, the Dragon and the Griffon. Others like the Salamander are real animals which also have a mythological or imaginary “double” that originated in ancient arial.
Bestiariums provide us with beautiful imagery and texts about fantasy creatures, but what about their sounds?
Taking the Borges’s book as a source of inspiration, this audiovisual installation presents a soundbook containing imaginary soundworlds for seven fantasy beings: the Amphisbaena, the Dragon, the Unicorn, the Griffin, the Basilisk, the Salamander and the Leucrocota.
The sound compositions were exclusively created out of vocal recordings made with the Neuen Vocalsolisten Stuttgart. The reason for working with vocal sounds stems from a metaphorical link between fantasy creatures being the product of the human imagination and a sound material coming from the human body.
Following Borges´ advice about the reading of his book, this soundbook has likewise no defined beginning or end.

Installation at the F.F. Bibliotek, Donaueschingen, Germany:
In the reading rooms of the F.F. Library, visitors find fragments of a soundbook whose “pages” have been removed and placed on different bookshelves. As visitors walk up into the attic, the dispersed pages are now found together in a book waiting to be read and listened to.
The core concept of the Klangbuch der imaginären Wesen has been developed and realised differently for two different formats: as a stereo radio art piece broadcast in Deutschlandradio Kultur in 2006, and the present multichannel sound and video installation piece premiered in the Donaueschinger Musiktage 2007.
The images shown in this installation are from the Bestiary of Ana Walsh (1633) and are used with the kind permission of the Manuscript Department of Royal Library of Copenhagen.