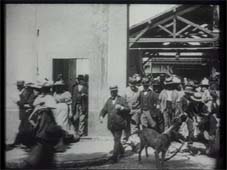 The film Arbeiter Verlassen die Fabrik (Workers leaving the factory) by Harun Farocki set the starting framework for the creation of this audiovisual piece. The original film was edited by Harun Farocki and myself in order to create a shorter version that would suit my musical ideas. The original soundtrack contains the voice of a speaker describing and reflecting on the images shown. Most of the spoken texts were edited out and only a few left. Therefore the film shown in this performance becomes essentially a silent movie. This allows the incorporation of music as a new, influential and shaping element that opens up a new dimension for the perception of the visual sequences.
The aim was to create a music that works as a parallel entity to the film and yet is inspired and structured by the film. The sound material includes a wide range of real sounds that were heavily manipulated and processed in such a way as to generate a specific sound palette.
The main area of exploration is the sensory counterpoint of sounds and images and their interaction, ambiguity and friction. How does a particular music shape the perception of images?. How do images shape the perception of a particular music?. In his book “Audio-Vision: Sound on Screen” Michel Chion suggests that sound and image are always independent, and it is simply our conditioning and use of conventions of synchronization that make us believe that they are not.
I believe the French filmmaker Robert Bresson provides us with an illuminating metaphor: “Images and sounds, like strangers who make acquaintance on a journey and afterwards cannot separate”.

About the film:
Arbeiter verlassen die Fabrik (Workers Leaving the Factory)
by Harun Farocki
1995, 36 min., b/w
La Sortie des Usines Lumière à Lyon (1895) – such was the title of the first cinema film ever shown in public. For 45 seconds, this still-existant sequence depicts workers at the photographic products factory in Lyon owned by the brothers Lumiére hurrying, closely packed, out of the shadows of the factory gates and into the afternoon sun. Only here, in departing, are the workers visible as a social group. But where are they going? To a meeting? To the barricades? Or simply home? These questions have preoccupied generations of documentary filmmakers. For the space before the factory gates has always been the scene of social conflicts. And furthermore, this sequence has become an icon of the narrative medium in the history of the cinema. In his documentary essay of the same title, Harun Farocki explores this scene right through the history of film.