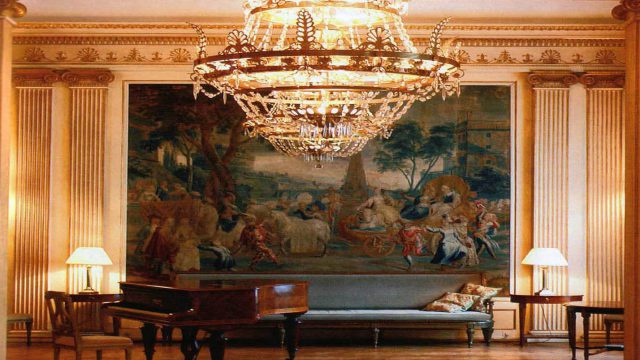 Environmental and abstract sounds are manipulated and assembled on the computer to create a fabric of sonic images at the verge of recognition and ambiguity.
Four scenes that continuously emerge and vanish like blurred memories of absent places and events.
During the exhibition of at the Argentine Embassy in London, eight small loudspeakers were hidden in different places around the wide entrance hall of the Embassy; behind window curtains, sofas and mirrors. Each sound postcard was assigned to a pair of loudspeakers. Volume was adjusted in a way that visitors had to stand relatively close to the area in which hidden loudspeakers were placed.
Each sound postcard is inspired by and metaphorically associated to an Argentinean text belonging to a book or a popular song.