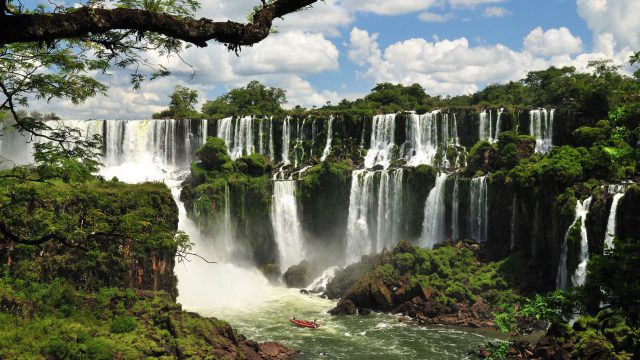 The Iguazú Waterfalls, written “Iguaçu” in Portuguese and “Iguazú” in Spanish, are situated at the Argentinean-Brazilian border. They are one of the most spectacular waterfalls in the world and are already part of the UNESCO World Natural Heritage Site. The Iguazú Waterfalls consist of about 275 contrasting waterfalls and cataracts, with heights varying between 60 meters and 82 meters.
Before the arrival of the first European in 1541, the Waterfalls area was the land of the Tupi-Guaranies aborigines. They called the waterfalls “Yguasu”, which in Guarani language means “Big Waters”. The Guarani language is still widely spoken in the northeast of Argentina, some parts of Bolivia as well as in the southwest of Brazil, and is, together with Spanish, the national language in Paraguay.
Today is the Iguazú area an immense National Park shared between Argentina and Brazil. A subtropical jungle surrounds the waterfalls. This jungle is populated by more 450 different kinds of birds as well as by monkeys, reptiles, butterflies and mammals.
I traveled to the Iguazú Waterfalls and made several sound recordings in the whole area. Alongside sounds coming from different waterfalls, I also made sound recordings of a wide variety of birds, animals and insects. In addition, I made recordings with a Paraguayan harp player as well as with an accordion player. These two instruments are deeply rooted in the traditional folk music of the region. With the use of nature and instrumental sounds I aimed to created a personal musical re−interpretation of the waterfall area. The structure and dramaturgy of the piece is metaphorically based on an ancient saga on the creation of the waterfalls.